In their seminal 1987 classic, Michael Stipe and his band R.E.M. proclaimed in song what many of us were feeling in the late ‘80’s. “It’s the end of the world as we know it…and I feel fine…” Now, I may have only been a toddler when that song came out, but I love a good apocalyptic thriller as much as anyone else. The truth is I think we’re all a little fascinated by the end times. You’ve seen it right? “The zombie apocalypse is upon us!” Surely many of you are fans of AMC’s ‘The Walking Dead’, in which a sheriff, along with other human survivors, struggle to remain alive in a world overrun with flesh-eating zombies. Or National Geographic’s TV show called ‘Doomsday Preppers’ which profiles various survivalists, or “preppers,” as they get themselves and their families ready for the end of civilization. From the ancient forecastings of Nostradamus to the more modern warnings of Harold Camping, it seems as if end times prophets are all the rage.

And it seems as if Jesus is joining their ranks in our text today. “Nation will rise against nation, and kingdom against kingdom; there will be great earthquakes, and in various places famines and plagues; and there will be dreadful portents and great signs from heaven.” OK, I’m following you, Jesus. That makes sense. But couldn’t you have been a little bit more descriptive?

Something like, “There will be scientists bringing dinosaurs back to life in test tubes on an island theme park” — like in Jurassic Park? Or, “There will be extraterrestrial visitors threatening to destroy all of our worldly monuments and take over our planet” — á là Independence Day? At least then, if I saw Jeff Goldblum running about, I’d really know what was about to happen.

But OK…I get it. Plagues, and earthquakes, and wars, and disasters we call ‘natural’, and economic troubles…  Hmmm…it seems as if maybe we’re living in these end times already…

Like the temple Jesus describes, we know what it’s like to feel like our lives are crumbling down around us, don’t we? Living paycheck to paycheck. Or sometimes no paycheck at all. Mortgages, rent, heating, electric bills, overscheduled lives, barely able to breathe… One thing after another piling higher and higher while we sink lower and lower. It can feel like we’re drowning in rubble… And let’s not pretend like this is easy. Society tells us to “be self made!” and to “Pull yourself up by your bootstraps!”

But let’s be honest, that’s a Really. Tall. Order.

And no offense to the apostle Paul, but I think he gets it wrong in his letter to the Thessalonians that we heard earlier. He says, “…we did not eat anyone’s bread without paying for it; but with toil and lament we worked night and day, so that we might not burden any of you. This was not because we do not have that right, but in order to give you an example to imitate. For even when we were with you, we gave you this command: Anyone unwilling to work should not eat.” Sorry?!? Anyone unwilling to work should not eat?!? Not to diminish Paul’s ministry, but I’m pretty sure Paul didn’t have monthly bills. And I’d be willing to bet that the upkeep on a pair of sandals is a little less expensive than a hybrid car.

And in today’s gospel Jesus too gives us a word of hope amidst all the crumbling. “Do not be terrified.” “Do. Not. Be. Terrified.”

The original audience for Luke’s gospel would have been very familiar with the type of destruction and apocalyptic terrors Jesus was describing. The Temple in Jerusalem was the center for Israelite and Jewish worship and was thought to be the “footstool of God’s presence on earth.” The innermost part of the temple, the holy of holies, was God’s dwelling place for these Jewish believers. In the year 20 CE, after extensive renovations to beautify the Second Temple in Jerusalem by Herod the Great, it was utterly destroyed by the Roman empire in the year 70. We don’t know the exact date of Luke’s gospel, but it would have been within 10 to 20 years after the destruction of this Second Temple. The sheer beauty of the temple was both a source of joy and a cause for great offense for faithful Jews in Jesus’ time. The Temple was majestic and stunning, a testament to the holiness of God and a reminder of God’s presence in the midst of a chaotic world. But the adornments that made it beautiful were funded by Herod, an oppressive ruler who killed his own children. For Jews during this time, good or bad, the Temple in Jerusalem was where God dwelled.

But maybe God’s not dwelling where we think God dwells. Jesus seems pretty clear about the utter demolition of the Temple, and he would have certainly known the implications of that claim; yet he doesn’t seem to be bothered by it in today’s story. In fact, Jesus seems rather calm, almost nonchalant. Maybe he knows something we don’t. Perhaps Jesus is calling us to recognize where God truly dwells. Inside every person here…within the assembled and worshiping community…in the life-giving waters of baptism…in the sustaining meal of bread and wine…in acts of self-giving for the sake of the other…

There’s an old rhyme that I learned in Sunday school that talked about what a church looked like. Maybe you remember it. Feel free to join in if you do. “Here’s the church, here is the steeple, open the doors, and see all the people. Close the doors and hear them pray, open the doors, they all walk away.” It’s cute.

But I wonder if Jesus would have used slightly different phrasing in light of his words today: “There’s no more church, there’s no more steeple, all we have, are God’s people. God gives us grace, when we can go no further, God gives us love, to care for each other.” Though fear and uncertainty abound, Jesus the Christ is bringing redemption by releasing us from the very temporal things that bind us. Out of the rubble God brings new life. Resurrection…has arrived. 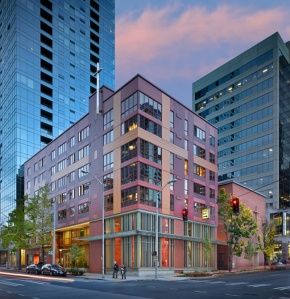 Yet, even as we wait for the fulfillment of God, we catch glimpses of resurrection in the here and now. Gethsemane Lutheran Church is an ELCA congregation located in downtown Seattle and is the oldest Lutheran church in the city. A few years back, the church began exploring options to sell, knock down, and downsize some of their valuable downtown property. Now, in addition to a 150-seat chapel, the basement is a day shelter for homeless women and children, and a Sunday soup kitchen for 120 of Seattle’s homeless, while above the worship space sits a five-story affordable housing complex. Out of the rubble God brings new life.

And here in Logan Square, Kimball Avenue Church has its own resurrection story. In 2010, after a steam boiler ruptured and irreparably damaged much of the church building, the decision was made to deconstruct the church near the corner of Kimball and Fullerton. Deconstruction, as opposed to demolition, means that what can be salvaged and repurposed is removed and reused rather than discarded. The stained glass windows went to one nearby congregation. The pews went to another, and so on and so forth. Kimball Avenue Church is still meeting in their old parsonage and hopes to rebuild on the same site sometime in the near future. Out of the rubble God brings new life.

And this new life is not one of idleness or complacent existence. Jesus calls us in the gospel lesson today to “endurance.” That doesn’t sound passive to me. We heard Paul urging the Thessalonians to avoid laziness and apathy. Paul exhorts them, “Sisters and brothers, do not weary in doing what is right.” And here today, we are working to bring an end to the very temporal things that bind us; we collectively work to end systems of oppression, we advocate for those whose voice is silenced, and we stand with those whom society says are somehow less than.

So what about this community? What is St. Luke’s resurrection story? Well, we’re all familiar with that, aren’t we? A congregation down to a handful of faithful, and some might say stubborn, people only a few short years ago… A small, yet mighty group that believed in God’s promise of newness of life… So now what? Redevelopment is a vital part of this community’s narrative, but now 7 years down the road, where is new life springing up? Well, every Wednesday, about 50 people gather downstairs in Haberland Hall to have dinner together. What started as a small group of about 20 has grown into something that we had only imagined. Food insecure and food secure neighbors alike, those that live close by and those that commute for 2 hours on buses, sitting around tables, eating delicious food, talking about collective struggles of life, and envisioning a world where our life circumstances are not what defines us. And just under a month ago a group from this congregation, along with many others, rode buses down to Springfield to rally for the rights of all people to marry regardless of their orientation. And now it’s been signed into law! Because of your efforts, along with your sisters and brothers, the lives of so many have been radically changed. And today, we mark the culmination of a fall stewardship campaign with a good ol’ fashioned Lutheran potluck. We celebrate the ways in which God has blessed and continues to bless our lives with abundance. Resurrection is a continual process. It happened long ago, it’s still happening today, and it calls to us from God’s eternal future. We live into God’s promise of new life Every. Single. Day.

And that is the call of resurrection. That there’s a new order to things. That death no longer has the last word. And that life is the ultimate line of our story. God, through Jesus, releases us from that which holds us captive and restores that which has been broken. Out of the rubble God brings new life.

We’re moving rapidly into the season of winter. All around us there are signs of change. A brisk chill in the air. Some leaves are still barely clinging to branches. Days are becoming shorter, and the nights grow longer. As we hurtle toward a new church year, we are being called to a life of resurrection. One in which God is bringing new life out of the rubble. One in which God is making all things new.

To that God be all glory and honor, now and forever. Amen.