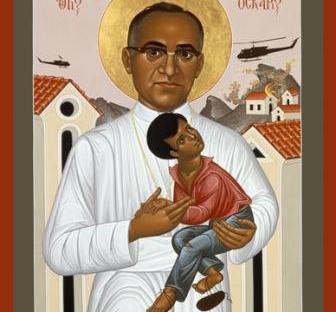 The Salvadoran Civil War was a conflict between the military-led government of El Salvador and guerilla revolutionary groups that lasted for over 12 years, from 1979 until 1992. Among the over 75,000 lives lost in this extremely violent war were six Jesuit priests from the Universidad Centroamericana, along with their housekeeper and her 15 year-old daughter. They were dragged from their beds very early in the morning, were made to lie on the ground, and were shot.

Another one of the murders ordered by the military government of El Salvador was that of Archbishop Óscar Romero, who was assassinated as he presided at Mass in 1980. Romero was extremely vocal in speaking out against the poverty, social injustice, assassinations, and torture that plagued the country of El Salvador. Romero argued that the church should not support the largely US-backed Salvadoran government because it legitimized terror and human rights violations. At the heart of it, Romero, along with other martyrs, was murdered for speaking out against injustice and advocating for a peace that is centered in mutual love and respect.

Archbishop Romero offers her a chair. Marianela prefers to talk standing up. She always comes for others, but this time Marianela comes for herself. Marianela García Vilas, attorney for the tortured and disappeared of El Salvador, does not come this time to ask the archbishop’s solidarity with one of the victims of D’Aubuisson, Captain Torch, who burns your body with a blowtorch, or of some other military horror specialist. Marianela doesn’t come to ask help for anyone else’s investigation or denunciation. This time she has something personal to say to him. As mildly as she can, she tells him that the police have kidnapped her, bound, beat, humiliated, stripped her––and that they raped her. She tells it without tears or agitation, with her usual calm, but Archbishop Romero has never before heard in Marianela’s voice these vibrations of hatred, echoes of disgust, calls for vengeance. When Marianela finishes, the archbishop, astounded, falls silent too.

After a long silence, he begins to tell her that the church does not hate or have enemies, that every infamy and every action against God forms part of a divine order, that criminals are also our brothers and must be prayed for, that one must forgive one’s persecutors, one must accept pain, one must . . . Suddenly, Archbishop Romero stops.

He lowers his glance, buries his head in his hands. He shakes his head, denying it all, and says: “No, I don’t want to know.”

“I don’t want to know,” he says, and his voice cracks.

Romero weeps and doubts and Marianela strokes his head.

Questions for reflection: What convictions do you cling to at your innermost core? Do you find yourself with doubts as you consider the world around you and how God calls us to live in the world? Are there changes in your way of living that you would want to make as we enter this new year in the life of the church?

One thought on “Advent Devotional: Tuesday, December 2: The Martyrs of El Salvador”