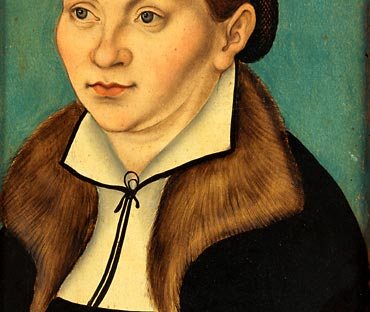 Katharina von Bora Luther, affectionately known as Kathie (pronounced “Katie”), was the wife of the great Reformer, Martin Luther. She was born to an impoverished family on January 29, 1499 in a small village just south of Leipzig. When she was about 10 years old, she was sent to live at a Cistercian convent where her maternal aunt was the abbess, and her paternal aunt was a nun. When she was 16, she made her final vows to become a nun. 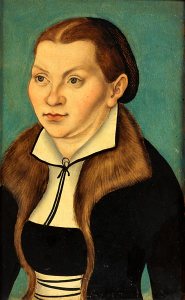 By 1523, Martin Luther’s teachings and reforms were beginning to have an effect on the cloisters in the area, and many monks and nuns began abandoning their monasteries and convents. In April 1523 Kathie and 8 other nuns were rescued from the convent and brought to Wittenberg. There, some returned to their families, some found shelter with friends, and some married. At age 24, Kathie was proud and particular in her choice of a husband. Martin tried to find a husband for Kathie, but she would have none of them, except one other or Luther himself. On June 23, 1525, Martin and Kathie became engaged and then married that same day, amid a small circle of friends. He was 42, and she was 26.

Marriage brought many changes to Luther’s manner of life. In a famous remark he declared, “One wakes up in the morning and finds a pair of pigtails on the pillow which were not there before.” Martin also cleaned up a bit after marriage, noting, “Before I was married, the bed was not made for a whole year and became foul with sweat. But I worked so hard and was so very weary that I tumbled in without even noticing.”

Kathie was no doubt just the type of wife Luther needed. She was a conscientious mother, an efficient housekeeper, a wise manager of farms, gardens, cattle, and livestock, for which Luther had little time. After 1540, he occasionally called her the “boss of Zulsdorf,” because sometimes she made lengthy visits to the farm which Luther had purchased when her brother was about to lose it through foreclosure. Luther, who had little time for anything other than writing and teaching, often thanked God for such a “pious and true wife on whom the husband’s heart can rely.”

At this point, all the women, and the honest men, are nodding in complete agreement.

Kathie was, in fact, exactly the kind of wife that Martin Luther needed. I think we could all use someone like Kathie in our lives; someone who is honest with us, who can see right through our false selves that we put up, and who loves us in spite of all of that. Kathie was a no-nonsense kind of woman. She was strong, she held her own, she wasn’t afraid to call people out on their stuff, and she loved fiercely. As a partner to the great Reformer, Martin Luther, who was known for being a bit stubborn and overly blunt himself, they were a perfect match.

If Blessed Martin Luther is a saint in the Lutheran church, then Kathie Luther is most certainly a saint as well.

Questions for reflection: Who are the strong, capable, no-nonsense people in your life? Do you have someone that you know that will call you out on your stuff, and also love you fiercely? How can we be that for one another? Can we be firm, yet loving with each other?