Today makes up the third part of the triad of the Comites Christi, the “Companions of Christ,” which are St. Stephen, the first Christian martyr; St. John, witness to the light of the Incarnation of Christ; and the Holy Innocents. It’s an up-and-down effect, and seems out of joint with the frivolity of our western Christmas season, until you consider the arc of Christ’s life as a whole. On the one hand, we have the awe and joy of God incarnate, come to us as a child; while we also have the servant of the world, put to death that we might have life. It’s a tension that we live with every day. We live in realms of simultaneous joy and agony, never completely divorcing one from the other.

The Holy Innocents were the children of Bethlehem; some numbers suggest fourteen thousand, who were slaughtered by order of King Herod in his attempt to eliminate the infant Jesus. There is no record of this event outside of the Gospel of Matthew, but given Herod’s character, it is certainly within the realm of possibilities. He drowned his sixteen-year-old brother-in-law, the high priest; killed his uncle, aunt, and mother-in-law, with several members of his brother-in-law’s family; his own two sons; and some three hundred officials he accused of siding with his sons. Although the Holy Children would not have been believers and were unaware of the reason for their fate, the were nonetheless killed for the sake of Christ, and in a sense, in place of him. 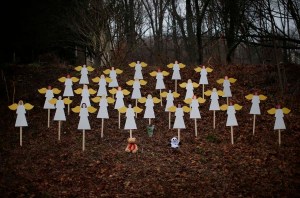 The day is an appropriate time to remember children, particularly the innocents of all ages killed in the slaughters of history, such as: 450 unarmed Cheyenne men, women, and children in Sand Creek, Colorado on November 29, 1864; nearly 300 Sioux men, women, and children in Wounded Knee, South Dakota on December 29, 1890; the massacre by the Turks of the Armenians, who lived in the Turkish part of Armenia on April 24, 1915; the destruction of the Spanish town of Guernica by German and Italian aircraft in the first mass bombing of an urban community on April 26, 1937; the millions of Jewish, Latvian, French, and Polish people, as well as others deemed undesirable by the Nazis from 1939 through 1945; the cities of Hiroshima and Nagasaki destroyed by the first and second atomic bombs used in warfare; murders in Rwanda, Darfur, the Sudan, Syria, Palestine, and elsewhere; the children of Sandy Hook Elementary in Connecticut; 132 young ones massacred in Peshawar, Pakistan; infants and children abused by their elders; and countless others…

Question for reflection: How can we better stand up for children in this world?