* a sermon preached at Luther Memorial Church of Chicago on March 1, 2015 *

Make us humble, Holy One,
That we might receive your mercy as a gift,
Whether we are last, or first, or somewhere in between.
Amen.

When I was in college, in my last semester, I had to take Microeconomics. Don’t ask me why I waited until my last semester to take a required course like Microeconomics. Suffice it to say that I struggled with it. Which is strange, I think, because I had no problem with Macro. Global economies, world monetary policy—that stuff makes sense to me, I got that. But when we start talking about economies of scale and elasticity, I get super-lost super-quickly.

Anyway, the whole semester I was scraping by, barely making it, not to mention that super-senioritis had set in big time—that’s right, I was on the 5-year plan, don’t judge. So, super-senioritis coupled with a pretty sizeable workload, do not for a pleasant final semester make.

So, like any responsible student would do, I went and talked with my professor with about a month left in the class, and for me, school. I wanted to know where I stood and where I needed to get to. He said, “Well, you’re really borderline. You definitely could have done more, but essentially you need to get an A on the final to pass my class.”

So, I studied my butt off. I crammed as much information as I thought would fit into this rather large dome-piece, and I went and took the final. There was about a week or so lag time between the last day of classes and graduation, so a couple of days after my last class, my brilliant parents thought it would be wonderful to de-stress by taking a family roadtrip to visit relatives in Oklahoma. Not a bad idea, but the brilliance was in the idea that we would leave on the last day that final grades were to due and subsequently posted online.

You had to be logged-in on a computer in order to check grades, and obviously I was in a car. So I’m sitting in a car, headed north on I-35, texting my then girlfriend/now wife Tiffany, asking her to refresh the page, no joke, literally every 5 minutes to see if my Micro grade had been posted yet.

After an agonizing 2 and a half hours, after an endless stream of exasperated “No, not yet.” responses to my incessant questioning, finally I had my answer…

“You got a C-minus,” the text read.
“Whoa… Wait, for what? For the final or for the final grade?”
“Final grade,” Tiffany replied.

“There isn’t a grade listed for the final exam, just a final grade,” she texted.

A C-minus. No final exam grade listed. My professor wanted me to know that I had only barely passed his class, and even then, I’m not exactly positive I did. Honestly, I probably didn’t get an A on that final, but sometimes being a super-senior set to graduate carries some perks along with it. Don’t let that be a lesson to you, kids.

I probably didn’t deserve to pass Microeconomics, but I was given a gift. A tremendous gift that ultimately prevented a ton of other potentially devastating outcomes for me.

Yes, life is not fair. And sometimes we benefit from that unfairness.

And other times, the unfairness is so glaringly obvious to us, that we can’t help but shout at the top of our lungs, “BUT IT’S NOT FAIR!” 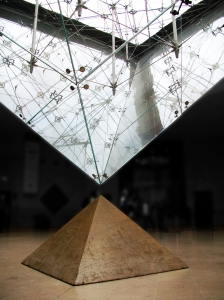 But this is not that.

This is a reversal of the power structures, the status quo, of the world we live in. A new reality in which those at the end of the line are at the front, and those at the beginning of the line must…well, the losers walk to the other end of the field, as we say.

But not only that… “I can deal with having to wait for my share,” we say, “but at least I’ll get what’s coming to me.”

But again, no, that’s not how it works.
In this vineyard, everyone gets the same wage, regardless of how long they worked.
“Hold on a second, you mean I’m getting paid the same amount as this schmuck who barely worked 2 hours, who barely broke a sweat?!? Outrageous! Ridiculous!”

And right there is where I want to pause for a moment…
Right here…in this moment of recognition.

I want you to pay attention to this moment of attention. Take notice of this noticing. Think about how you feel right at this very second…

I’ve been throwing this around in my brain for a few weeks at this point, and I’m not sure that it’s a fully-formed thought yet. But I think that this moment of noticing injustice is crucial to the work of justice. See, I think that the beginning of the work of justice is the noticing the existence of injustice. And not for ourselves, but for others. When we recognize that the world as it is is not the world as it should be, when we recognize that there are those that have and those that have not, and we question why that’s so, we’ve done something incredibly important. I cannot stress this enough. I really do think that this recognition is vital.

And Lent is a really good time for recognition. When we’re going through our spiritual house, taking stock of what is needful and what is not, we’re paying closer attention, noticing what had previously gone unseen, recognizing what often gets passed over or swept aside. This recognition forces us to look at our habits and make conscious efforts to amend them. Lent is a time of spiritual disciplines and practices. In the liturgy of Ash Wednesday, we commit ourselves to the discipline of Lent: of prayer and fasting, of self-reflection and repentance, of sacrificial giving and works of love. These are not done as exercises in depravation, they are meant to awaken us to a deeper reality, the reality of those without, the have-nots, and to realize that, in fact, we all come to God as have-nots. As Paul notes, all have sinned and fall short of the glory of God.

Our parable today subordinates rewards to grace. We have been given a gift.
A tremendous gift.

Author and theologian Douglas Hare writes, “Yes, the sacrifices of the apostles and other followers of Jesus will be honored by God, but the reward will so far outstrip the sacrifice that it must be seen as nothing more than sheer grace. So, although some may feel that their long and costly service qualifies them for a higher rate of pay in the kingdom, all must humbly acknowledge that in fact they are like eleventh-hour workers. None deserves the glorious future that God has prepared for them.”

That’s an interesting word, I think…“Deserve”…

We say that a lot, don’t we? I deserve this. We say, “Treat yo’self,” right? But I mean, do we “deserve” anything at all? What is that we, we who only a week and a half ago heard “Mortal, you are dust, and to dust you shall return,” what is that we actually deserve?

But if that’s true…so what?

Well…maybe we are to consider the parable as an invitation. An invitation to participation in the worst pyramid scheme ever dreamed of. An invitation into a way of living that subjugates no one, but instead defies all the conventional rules of economics, seeking real, lasting justice for those for whom a daily wage is but a far-off and hoped-for reality. A pattern of life in the reign of God in which all come to the table at the very end of the day, hands and arms outstretched, deserving nothing, but all receiving the exact same, receiving grace upon grace from the one who offered himself for us.

Thanks be to God.

One thought on “Worst. Pyramid Scheme. Ever.”