Please pray with me this morning:

Loving God,
You are our shepherd.
Whether we feel separated from the flock,
are led astray from the pasture,
or we simply don’t like each other very much.
Remind us that you love us still.
Amen.

I have a sister who is 4 years younger than me. Growing up together was…contentious, to say the least. We were both so competitive, and we really didn’t get along. The sibling rivalry ran deep. We would often fight and argue, and when it got to be too much, our parents would put us in the same room together and shut the door and leave us there until we worked it out.

Now, I don’t know about you, but the last thing I want to do with someone who I really dislike or disagree with is sit in a room and be forced to just look at them, or talk to them. It’s humiliating and frustrating, and frankly, it’s a heck of a lot harder to imagine popping my sister’s head like a pimple when I’m actually looking at her face.

Which is perhaps what was most genius about my parents’ methods. 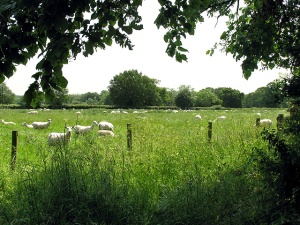 But then Jesus offers this, “There are other sheep, they are part of this fold also. There is one flock. One shepherd.” *sigh* You know, I was right there with you until then… When it was about me and about us, I was good. But when you start talking about them…those, others…well, I don’t like that so much. Like being forced to sit in a room and look at the face of someone I’m trying to fight with.

Maybe like Paul and Barnabas those others believe strange things like a multiplicity of gods. Maybe they believe in ritual sacrifice. Or maybe they don’t see things exactly the same way we do. Or maybe they stand on a street corner shouting their version of the Gospel through a loudspeaker.

I imagine Paul wasn’t thrilled with his mission. How could he be? I mean, if Peter, like we heard last week, understood his mission and ministry as being to the Judeans, Paul explicitly understood his ministry as specifically to the Gentiles, also sometimes translated as “the nations,” or in other words…everyone else. And that’s a pretty expansive view of this flock.

I’m sure that made Paul a little uneasy. And I think it makes us uneasy too. But, I also don’t think we get a choice. The point is, we don’t get to shut them out. We don’t get to quietly condemn them under our breath and just walk away.

Because here’s the thing, Jesus doesn’t give us a pass. Just like with forgiveness, or the obscenely inclusive love of God, we don’t get an exemption from sitting with and engaging with and talking with, and yes, especially from loving, those other sheep. Because they are sheep. And they are in this fold. The fact of the matter is, there are no “us” sheep and “them” sheep. We are all sheep. All one in Christ, as Paul will later write to the community in Rome.

So even though we love to be told what we already know, even though I love to surround myself with people who think like me and act like me and agree with me and will tell me exactly what I like to hear, that is not this flock. The depth and breadth of this flock is deeper and wider than we like to, or care to, imagine.

It’s easy, in some ways, to set up rules and dichotomies. I know what it means to follow Jesus, they don’t even know who Jesus is. I’ve got it all figured out, and they don’t even know the problem. I’m a real Christian, they’re just…something else. I’m right, and they’re wrong. I’m in, and they’re out. But that’s not how this works. We think that we’re the gatekeeper, deciding who’s part of the fold and who’s not. Who’s in the pasture, and who’s out in the wilderness. Who’s a sheep, and who’s a goat, or worse, a wolf.

But that’s not what we get from John. Again, “There are many other sheep. They’re part of this fold too.” I’m a sheep, and you’re a sheep, and we are lavished with the comfort and protection and love of the shepherd. But that person that I disagree with…the one that makes me turn my head and cringe a little bit…the one that hurts me that they would call themselves a Christian…? They’re a sheep too.

And this is the complete paradox and absolute scandal of the love and grace of God. On the one hand, inexpressible gratitude that God would extend God’s love and grace to me. Me, who struggles every day to get it right. Me, who sins despite my best intentions… God loves me. And you. And gives us an indescribable gift of grace.

And…on the other hand the utter scandal that God would do the same for those that I would rather fence off. Those people that I call “other.” The person that I can’t stand, yet that I’m forced to sit face to face with. And recognize that God loves them and calls them “Beloved child.”

And so, people of God, maybe our ministry is less about fencing the pasture, and more about living well with those that we’d prefer not to. Maybe our call is less about drawing deeper lines in the sand, and more about trying to overcome those divisions. Maybe instead of engaging in ideological spiritual warfare, we’re called to be people of love. And reconciliation. And restoration. And peace.

Living lives transformed by the shepherd who gives us life.

One thought on “Sibling Rivalry—or, Exactly How Big Are We Talking?”