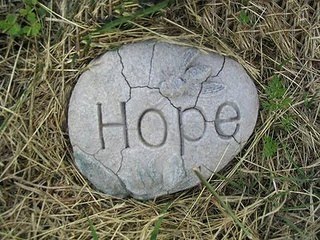 Since sermons are primarily intended to be heard, you can listen along here.

Please pray with me:

Be our hope, Holy One.
And whether a comforting hug,
a listening ear, or simply stillness,
Let it be exactly what we need.
Amen.

What does hope look like? Is it perfect, flawless, and pristine, like a diamond? Or is it dirty, gritty, and a little rough around the edges? What do we have when we say we have hope?

If the first chapter of Ruth was starting on a downer, we begin to turn the corner in the second chapter.
The second chapter is where we start to make our way out of the shadows into the light.

The young heroine meets a strapping gentleman… A wealthy landowner, no less.

Ruth is like many fairy tales in that regard. It follows a familiar and predictable storyline.

And Ruth is not like any fairy tale we’ve ever heard before.
Ruth is infused with historical and contextual elements, it’s ripe with spirituality and piety, and there’s a definite sense that the primary drivers of the plot lines in Ruth are the practices and convictions formed as a result of the characters’ religious beliefs.

Another way you might be tipped off that this isn’t a run-of-the-mill fairy tale is that, rather than a glass slipper, a magnificent palace with a grandiose library, or a wish-granting genie in a lamp, our heroine’s love interest offers her what every girl truly wants……no, not diamonds…that’s right…some wheat!

And so for the most outcast of the outcasts, and the most marginalized of the marginalized, a woman who, at one time, had a husband who provided for their family, but now had nothing more than her mother-in-law, who by the way was also a widow, for these most vulnerable of the vulnerable, a single grain of barley, much, much less an offer to glean from the harvest, was more valuable than the most precious of stones.

Ruth went looking for a small kernel of hope at the edges of the fields when she had absolutely nothing left. And she would have expected to find at least a morsel of help when she went looking. This is because part of the Torah, the law that the ancient people of Israel adhered to, obligated the people of Israel to care for the most vulnerable among them. 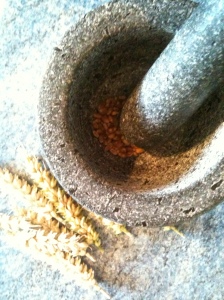 See gleaning was the custom of collecting leftover grain from the fields of harvest and was part of Israel’s legal welfare system. We might call it a safety net. In Leviticus and Deuteronomy, the ancient Israelites were commanded not to harvest to the edges of their fields, instead leaving some of the harvest for the poor, the sojourner, the widow, and the foreigner. The basis for this, God says, was that they were once slaves in Egypt, sojourners in a foreign land, and God provided for and delivered them. Therefore, they should provide for those who are now foreigners out of their own provisions.

The reality of poverty isn’t lost here. It’s a condition that was prevalent just as much in the biblical tradition as it is in our own time. I mean, even Jesus said, “You will always have the poor with you.” But Jesus wasn’t using that as a way of telling the disciples not to help the poor. Quite the opposite, actually. Jesus was referencing the 15th chapter of Deuteronomy, where it’s written, “If there is among you anyone in need, a member of your community in any of your towns within the land that the Lord your God is giving you, do not be hard-hearted or tight-fisted toward your needy neighbor. You should rather open your hand, willingly lending enough to meet the need, whatever it may be. …Give liberally and be ungrudging when you do so… Since there will never cease to be some in need on the earth, I therefore command you, ‘Open your hand to the poor and needy neighbor in your land’”

We are obligated, and in fact commanded, by God to care for anyone who is in any kind of need. And to do so without reservation, without prejudice, and without question.

I had a conversation with Nichole Martinez the other day. Nichole, you might remember, just came back from spending a couple of weeks in Palestine and Israel through the ELCA’s Peace Not Walls initiative. I asked Nichole what was sticking with her, what she would remember and carry with her. I’m paraphrasing, but she said, “I was struck by the generosity and hospitality of people, and it’s got me thinking about my own ways of practicing generosity and kindness in my encounters. Here were people, many of whom had literally next to nothing, who were going out of their way to serve us, to feed us, to make us feel welcome, and giving of what precious little they do have.”

I sat there stunned; I was blown away. Here were Palestinians, a marginalized and oppressed people giving of themselves, not because they expect anything from these visitors, but because it’s just what they’re supposed to do. It’s a societal system that operates outside of the quid pro quo way of living that is so prevalent here in the U.S. And these Palestinians were taught this way of living through their faith, Christian and Muslim.

This is a truth that I think we’ve forgotten. Because if we truly believed and lived as if we believed that every single person is a beautiful creation of God, I think our world would look very differently.

If you keep up with me on social media, you’ll know that this week I’ve been especially impacted by events that happened down in McKinney, Texas, very near to where I grew up. These stories are absolutely heartbreaking, and frankly, they’ve become so commonplace that I think our collective consciousness is hardly shocked anymore… And not only that, but our opinions and viewpoints and conversations about systemic violence and the sin of racism in our country are as divisive and vitriolic as ever. No one’s listening to each other because everyone is shouting, and we’re so sure of what we think we know that we’re completely uninterested in engaging with anyone who doesn’t agree with us.

It’s in these moments and situations that hope seems to be the furthest thing from our hearts, minds and lips. Especially for the ones who are having violence committed against them, how can you possibly have hope in a situation like that? What’s the single grain of hope that sustains us when everything else is gone, when we have absolutely nothing left?

I wish I had some lovely divine insight for you, some quick-fix, neatly-packaged kernel of wisdom that you could take with you and hold on to…

But I don’t… I can only offer that I have struggled, and I continue to struggle, with this too…
The past couple years of my life have been full of questions and wrestlings, and yes, the occasional insight about hope.

I wrote a blog post this past fall that reflected on a card I had received from a dear friend. I wrote:

Inside the card was a gift, part of a tabletop calendar that reads: “Hope is Only the Love of Life.” Not only did this card and gift make me grin widely, it also brought a few tears of relief to my eyes. Both the message and the gesture lifted a great, pressing weight off of my shoulders. It was as if I was seeing anew a known reality that had been clouded by vitriol, ugliness, and fear.
It’s true, isn’t it? Hope is nothing more than the fervently-held notion that life is valuable and every. single. person. has a sacred right to life.
Maybe hope isn’t so delicate after all, I continued. Maybe when we recognize hope for the absolute radical wrecking force that it is instead of a fragile shard that can’t possibly be held by our shaking hands, we set hope loose on the world to get down to the business of transformation. And that’s a tough question, I think… Do we trust that hope can hold its own in the world? Do we truly believe that hope is more durable than the destructive forces in our world?

Maybe… See, maybe hope isn’t the pristine, delicate, fragile thing we make it out to be. 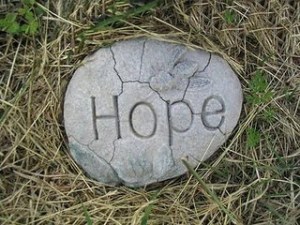 Maybe in the times when we need hope the most, the roughest, toughest, dirtiest, grittiest places in our lives, we actually find the hope that we need, and it actually doesn’t gleam and sparkle. Maybe hope is a little rough around the edges, jagged even. Maybe hope isn’t afraid of being dropped occasionally, because God knows how hard it is to hold on to something when your hands are full with the million other things you need to just get through the day. Maybe hope is smudged, and marked up, and well-worn. Maybe hope is exactly what we need hope to be.

Maybe it’s a grain of barley. Or a friend who will sit with you and not say anything, and yet is exactly what you need to hear. Or a community that will gather around you and pray for you and cover you with blessings.

Maybe it’s a morsel of bread, dipped in wine, filling you with just the right measure of hope to keep going this week, sustaining you with the unending love, limitless mercy, and unrelenting grace of God. A God who, in the death and resurrection of Christ, offers nothing more than exactly what you need.

Nothing more than hope for the world.

One thought on “A Girl’s Best Friend”